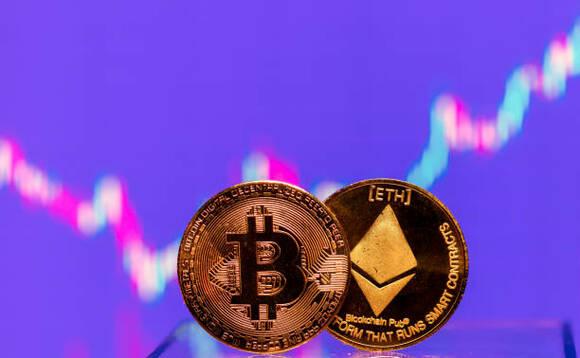 A 15% rise in Bitcoin prices in contrast to a 67% drop for Ethereum may be on the cards, according to JP Morgan's digital strategy analyst Nikolaos Panigirtzoglou.

His outlook was revealed last week in the first of a new regular publication focusing on prospects for alternative investments including digital assets.

But Goldman Sachs global markets managing director Bernhard Rzymelka said in a briefing note on Monday 1 November, that the cryptocurrency of the ethereum network may well soar 80% to $8,000 in the next two months if it keeps tracking inflation expectations.

However, JP Morgan's global markets strategy analyst Panigirtzoglou said: "Digital assets are on a multi-year structural rise, but the current entry point looks unappealing in our view for a 12-month investment horizon, as bitcoin appears to have returned to overbought territory."

This was good news for digital assets in years ahead compared to other alternative asset classes, but he also cautioned that "for a 12 month investment horizon, we find the outlook for bitcoin and ethereum to be difficult at this time, not only from a valuation perspective, but also from our assessment that bitcoin has come back. in overbought territory."

"In turn, this creates the risk that the substantial increase in Ethereum network activity over the next several years, built into the current price of $ 4,100, will not materialize."

This translated into analyst expectation of a decline of around 67% based on the fair value price.

"Given the importance of financial investment in gold, such a crowding out of gold as an ‘alternative currency' implies a big advantage for bitcoin in the long run," said Panigirtzoglou.

He added: "A convergence of volatilities between bitcoin and gold is unlikely to happen quickly and is in our minds a multi-year process. This implies that the theoretical bitcoin price target of $146,000 above should be viewed as a long-term target, and therefore an unsustainable short-term price target."

He further said: "Assuming a stable 45% bitcoin share of the total crypto market, this implies upside potential of around 15% for digital assets over the coming year.

"In our opinion, unless bitcoin's volatility declines rapidly from here, a price point of almost $35,000 should be considered fair value at current volatility levels."