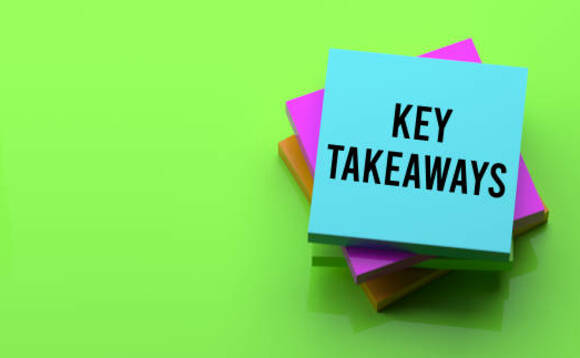 1. OBR revises forecasts
The Office for Budget of Responsibility (OBR) downgraded its unemployment forecast and increased its growth projections.

Despite this, the Chancellor warned of "challenging months ahead" due to the fallout of the pandemic, telling Parliament inflation is "likely to rise further" due to supply chain squeezes and rocketing energy prices.

"It would be irresponsible for anyone to pretend that we can solve this overnight," he said. "I am in regular communication with finance ministers around the world and it's clear these are shared global problems, neither unique to the UK, nor possible for us to address on our own."

The OBR forecast CPI to average out at 4% over the next year, with inflation reaching 3.1% in September.

Firstly, to ensure net debt excluding the impact of the Bank of England continues to fall as a percentage of GDP; and secondly, to only borrow to invest for "future growth and prosperity", with "everyday spending" otherwise being paid for by taxes.

Both proposed conditions must be met by the third year of every forecast period.

"This gives us the flexibility to respond to crises while credibly keeping our public finances under control," the Chancellor said. "Coronavirus left us with borrowing higher than at any time since the second world war. As the Prime Minister reminded us in his conference speech, higher borrowing today is just higher interest rates and even higher taxes tomorrow," Sunak said.

Ahead of the vote on the new charter, which will likely pass given the Conservatives majority, Sunak said it gives members "a simple choice": "To abandon our fiscal anchor and leave our economy adrift with reckless unfunded pledges or to vote on what we on this side of the house know is the right course - sound public finances and a stronger economy for the British people."

The budget introduced reforms to business rates, including more frequent revaluations every three years from 2023, relief for those adopting solar panels and a 12-month rate holiday on property improvements.

Sunak said: "First, we will make the business rates system fairer and timelier with more frequent revaluations every three years. The new revaluation cycle will be delivered from 2023."

He also announced that green investment relief will be introduced to encourage businesses to adopt green technologies such as solar panels.

Elsewhere, the Chancellor has announced companies in the retail, hospitality and leisure sectors will be given a 50% discount on business rates. Pubs, music venues, cinemas, restaurants, hotels, theatres and gyms are all eligible. Overall, it is a tax cut worth £1.78bn.

The reduction in the surcharge on bank profits was confirmed, with Sunak announcing it will drop from 8% to 3%. But combined with other tax rises, this still means bank's overall corporation tax will increase from 27% to 28%. Meanwhile, the £1m annual investment allowance will be extended to March 2023, instead of ending in December.

4. First multi-year spending review since 2015
The Chancellor laid out four fiscal judgements over the coming years to continue with his theme of "borrowing down, debt down".

Meeting fiscal rules with a margin to protect against economic risk
A return to obligations to "the world's poorest", reinstating a spend of 0.7% of national income on overseas aid by 2024-25.
Increasing total departmental spending by £150bn over this Parliament
Spending growth of 3.8% year-on-year
This will result in a real terms rise in overall spending for every government department, with public sector spending as a percentage of GDP reaching its highest level in 50 years, the Chancellor said.

5. Building back greener
Green commitments highlighted in today's budget include:

£817m over the Spending Review period for the electrification of UK vehicles and their supply chains and £620m of new investment over the next three years to support the transition to electric vehicles and increased new funding to encourage more people to walk and cycle.

£3.9bn to decarbonise buildings, including £1.8bn to support tens of thousands of low-income households to make the transition to net zero while reducing their energy bills.

£1.5bn investment in net zero innovation, including nuclear technologies and offshore wind, with over £380m for the UK's offshore wind sector, and £1.7bn to facilitate a final investment decision on a large nuclear project.

The £385m Advanced Nuclear Fund, which will develop the next generation of advanced modular reactor technologies, and the new £120m

£1bn on Carbon Capture, Usage and Storage (CCUS) and £140m over the Spending Review period to support hydrogen producers and heavy industry adopting CCUS through the Industrial Decarbonisation and Hydrogen Revenue Support scheme.

The fund includes £354m to support investment in life sciences manufacturing, £817m for the electrification of UK vehicles and their supply chain, and up to £230 million for the offshore wind sector.

The investment push from the budget also saw more than £1.6bn for the British Business Bank's regional funds, which provide debt and equity finance to small and medium enterprises, as well as £150m additional spending for the Regional Angels programme, which aims to reduce imbalances in access to early-stage equity finance in the UK.

Sunak has also introduced a talent network team that will work to identify skill gaps and offer relocation support to skilled workers from overseas.

The programme will launch in the Bay Area in San Francisco and Boston in the US in 2022, as well as Bangalore in India, before expanding to six countries worldwide by 2023.

The chancellor also announced a consultation to make it easier for companies to relocate to the UK hoping to create a system similar to Canada, New Zealand and Switzerland.

The chancellor announced today the allocation for the first round of bids from the Levelling Up Fund, giving £1.7bn to invest in the infrastructure of over 100 local areas.

The fund is the first steps towards concrete movement from the government's Levelling Up strategy and will include £170m for Scotland, £120m for Wales, and £50m for Northern Ireland.

Sunak also pledged a cash increase of 50% to annual R&D spending by the end of the current Parliament, to reach the government's target to increase R&D spending to £22bn by 2026/27.

In addition, he announced a change to R&D tax relief rules to include cloud computing and data costs, as well as pushing companies to use their R&D funding to be spent within the UK rather than overseas.

On Monday, the new UK Infrastructure Bank announced its first ever investment of £107m in offshore wind in Teesside.

8. Plans to review DC charge cap
The government has confirmed it will launch another consultation into the defined contribution (DC) charge cap in order to direct cash into the levelling-up agenda.

Sunak confirmed the government would "consult on further changes to the regulatory charge cap for pension schemes, unlocking institutional investment while protecting savers".

Documentation published alongside the budget said the consultation will, "before the end of the year", consider options to amend the scope of the cap so it can better accommodate well-designed performance fees to ensure savers can benefit from higher return investments, while unlocking institutional investment to support some of the UK's most innovative businesses.

It added the government would also continue wider policy work to understand and remove various barriers to illiquid investment.

This comes after a string of government reviews into the charge cap and investment in illiquid investments over recent years - and comes as part from an ongoing government bid to encourage more DC schemes to invest in illiquid assets such as infrastructure and renewable energy as part of its levelling-up agenda.

9. Net-pay scheme members to get 20% top-up from 2024
The government has set out plans to address the net-pay anomaly with a 20% top-up to contributions from April 2024.

The Treasury said it would introduce a system to make top-up payments to low-earning individuals in a net-pay arrangement.

Currently, savers whose earnings fall below the personal tax threshold, and are members of net-pay schemes, lose out on 20% tax relief which is automatically applied to savers in relief-at-source schemes.

The majority of master trusts use this structure, which has previously been described as a "hidden scandal".

The government said its plan would "help to better align outcomes with equivalent savers" in relief-at-source schemes, benefiting around 1.2 million people by an average of £53 per year. Around 75% of those affected are women, the government estimated.

Payments will be made at the end of the relevant tax year, meaning the first contributions will be received in the 2025/26 tax year.

The confirmation came alongside a response to a call for evidence into pensions tax relief administration, which had opened to responses in July 2020.

10. Overhaul of UK alcohol duties
Sunak scrapped a planned increase in duty on alcohol worth £3bn and simplified taxes to help pubs as they struggle to recover from the coronavirus pandemic.

The number of main duty rates has been cut from 15 to just six - the stronger the drink, the higher the rate.

Sunak criticised the current system of alcohol taxes as outdated and too complicated, as he revealed the changes.

Stronger red wines, fortified wines, or high-strength ‘white ciders' will see a small increase in their rates. Rose, fruit ciders, liqueurs, lower strength beers and wines will pay less. This means 3p will be taken off a pint of draught beer. There will also be lower rates for craft producers.

Minutes after the announcement, JD Wetherspoon's shares rose 5%. Shares in Marston's gained 6% and Mitchells & Butlers was up 4%.

Keeping with the theme of helping with the cost of living, the Chancellor cancelled a planned rise in fuel duty in the wake of rising petrol prices. Treasury claims this will save £15 on the cost of filling up the average car.

Sunak added this would save £8bn over the next five years. Fuel duty has now been frozen for the 12th year in a row.

Tobacco duty will also increase by an additional 4% for rolling tobacco, with a minimum 1% rise in excise duty.