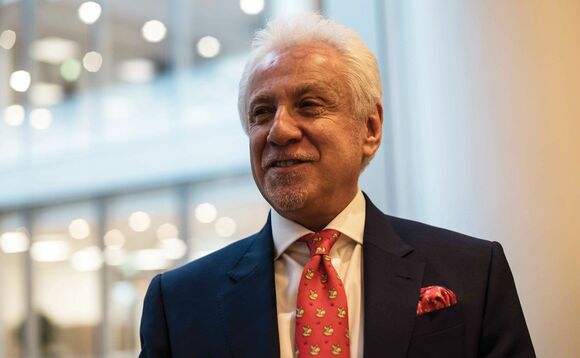 The asset management industry has been honouring "industry great" Paul Boughton, praising his kindness, positivity, passion for the sector and sense of fun, saying he will be "sorely missed".

Paul, known affectionately as ‘Old Bean', passed away on 4 September after battling a rare illness, amyloidosis, for the last two years.

According to his business partner Mike Evans, during this time, Paul showed a remarkable amount of determination to fight the illness throughout his treatment, which reflected his positive way of thinking.

Despite the challenges, Paul continued working, advising and helping people, remaining active, and focusing on giving something back to the industry where he had built a career for the last 35 years, through his work at MosaicNED.

Anyone who met Paul was struck by his passion for the asset management industry and his unwavering commitment to supporting people who work in this sector."

Paul leaves his wife, Linda, and his two sons, David and Richard.

Investment industry stalwart Paul held a number of senior sales and distribution roles during his career, before more recently turning his attention to founding new businesses focused on supporting and driving improvements in the sector.

He started his career in asset management over thirty years ago, holding regional sales manager roles at Ivory and Sime and spending over a decade at Schroders before taking up the position of managing director (Europe) at Legg Mason Global Investments from 2001-2006.

Paul then moved to become Head of European and Family Office Business at Neptune Investment Management for over three years before joining Mirabaud Asset Management at the end of 2011 to take up the role of head of sales and marketing UK and Northern Europe. He was also a non-executive director at LGBR Capital since 2015.

In the last phase of his business life, Paul was a founding partner at both Marketing Alpha Partners and MosaicNED, which sources, trains and places independent Non-Executive Directors (iNEDS) for UK fund boards.

According to friend and industry colleague Simon Ellis, who worked with him at Marketing Alpha Partners, Paul was "totally committed to these new small businesses, which were a response to his view of how the industry should be better at what it does and how it does it.

"He was an enthusiastic promoter of independence and diversity as the best way forward for the industry."

Paul was a popular and well-known figure in the investment industry and many of the tributes to him on social media include thanks for the help he gave people at different stages of their careers.

He is also remembered for his "larger than life" character, energy, drive, unfailing optimism and sense of fun, as well as his immaculate dress sense.

Here, some of Paul's friends and colleagues from across the industry pay tribute and share their memories.

Mike Evans, founding partner, Marketing Alpha Partners: "I have known Paul for over 30 years - he was a close friend and a valued business partner. Paul radiated positivity, was compassionate, and always focused on others, thinking about how he can contribute and help.

"For me, Paul was there to provide support, share his wisdom and his large sense of humour. He had many passions, from cars, to watches to writing poems (he even opened a conference presentation with one) and in the last twelve months, Paul was learning to play the guitar.

"His other great passion was his family - he came across as an immensely proud husband, father, and grandfather - supporting his family meant so much to Paul.

"And finally, he loved this industry. He loved the fast pace, he loved the people in it - many of whom are close friends of Paul's. As for the industry, we have lost a tremendous individual that helped many and was loved by many - that's Paul's legacy - the industry has been made richer with Paul's presence. He'd want us all to stay positive, keep calm and carry on."

Simon Ellis, independent chair, NED and strategy adviser: "‘Old Bean' was renowned for his generosity, his belief in professional salesmanship and positivity. Struck down far too young by a combination of a rare cancer and weak heart, he will be missed by all his friends, colleagues and client contacts. His wife Linda and two sons, David and Richard, have requested some time to gather their thoughts, and I'm sure there will be an appropriate time and way for us to express our respects. RIP Old Bean, you will be sadly missed, friend."

Jon Rebak, founding partner MosaicNED: "Knowing for nearly 35, and working with Paul for the last few years has been an immense privilege: Paul would greet me each day as if he'd just found a long lost friend. There are not many people in the world you can say that about. Paul was the greatest optimist, we had great fun, he made me laugh and I'll miss him deeply."

Tim Weller, chairman of Incisive Media: "The news of Paul's passing is desperately sad. Paul was such a decent man, honest and always fun to be with. He was such an optimistic man and was a great supporter to many in our industry. Our thoughts are very much with his family. Rest in peace Old Bean. The industry has lost one of its special characters."

Katrina Lloyd, Investment Week editor-in-chief: "Anyone who met Paul was struck by his passion for the asset management industry and his unwavering commitment to supporting people who work in this sector.

"Whether you were a new sales person on his team fresh to London or a young journalist trying to get to grips with the investment industry, including many Investment Week staff over the years, Paul was always generous with his time to make things a little easier and share his knowledge and contacts.

"He knew this is very much a people business and I think he would have been surprised but also very proud to realise the huge impact he had on so many people's lives.

"The whole Investment Week team would like to send our sympathies to his family and friends."

Hannah Smith, freelance journalist: "Paul was one of our industry's larger than life characters. He was a real gentleman and always so generous and full of fun. We shared some hilarious gossipy lunches, and I remember once he even brought me some artisan sausages from his local butcher, knowing I was an obligate carnivore. He was just a really kind and lovely man and his loss is an incredibly sad one for his family, friends, and colleagues. Rest in peace Old Bean, you will be missed."

Jon Yarker, journalist at Rhotic Media: "I first had the pleasure of meeting Paul Boughton in my first few weeks in the industry at a function he was hosting. I was very nervous and had no idea how to navigate a room full of fund managers, distribution figures and other journalists. Then Paul - in an impeccable Savile Row suite and a winning smile - sailed through the crowd, shook my hand and from then on became a valued companion to me.

"We often caught up at meetings, over the phone, industry events, lunches, or even just one-on-one pints after work. It was obvious how genuine he was, a warm and friendly character who was a true gentleman to everyone he knew. I was truly shaken to hear about his loss and my thoughts and prayers go to his family and friends. RIP Old Bean, you will be missed."

James Southern, director, head of financial institutions, UK Wholesale at UBS Asset Management: "I was fortunate enough to have worked with Paul twice in the 19 years that I knew him, and he always promised there would be a third. Paul was my boss, colleague, mentor and overall a great friend. I will miss our banter and the laughs but I have so many fond memories of our time working together. Ever the professional, his energy and drive was infectious, and Paul loved this industry. He will be sorely missed by me and so many others."

Zoe Powell, managing director at Share Communications: "Paul was a highly respected and very much-loved pillar of our industry - and most importantly a kind and lovely man. I first worked with Paul in 2001 and quickly came to realise just how well regarded he was, by so many. Ever since, his name has constantly popped up in conversation - there are very few investment people who don't know Paul! Always positive and cheerful, he never failed to make me laugh and I will always remember his mischievous chuckle. I can't believe I won't see him again - but he has given us all many happy memories to remember him by."

David Aird, managing director private markets at Ninety One: "Paul and I were fellow commuters from Suffolk to London for years. He was always immaculately dressed, engaging, energised and driven. He had time for everyone, was one of life's good people and it was easy to see why clients, colleagues and friends in the industry were naturally drawn to him. I was lucky enough to spend some time with Paul and Linda recently at their home in Sussex, sitting in the garden laughing and reminiscing about the wonderful industry we work in and the people within it. He represented all that was good with humanity and was one of a kind."

Marina Fraser-Harris, associate director at Peregrine Communications: "Paul will be sadly missed. He was great fun to work with - he had such a good sense of humour and always had a little twinkle in his eye."

Stuart Alexander, founder/ group chief executive officer at GemCap: "OB was a man of great positivity well before his diagnosis and throughout his battle, he kept things going not just for himself but his family, as well as those who worked with him. There will be many eulogies to OB over the coming days. All I know is that the man had a drive about him that was not just inspirational but infectious. A true gent and a man who I considered one of the most professional in the business."

Rod Aldridge, head of distribution at Cornelian Asset Managers: "Paul was without doubt one of the kindest & original members of our Industry. He will be sorely missed but not forgotten. Our thoughts are with Linda, David & Richard at this difficult time. Rest in Peace my good friend."

Last chance to register for this week's Sustainable Investment Festival: Stellar line-up of managers, CEOs and keynotes, plus CPD certified