Of 1,496 UK-listed open-ended funds, some 108 are run by managers named David or Dave - equivalent to 7.2% of funds. Meanwhile, just 105 funds in total have a woman at the helm. It's a stark reminder of the lack of diversity across the fund industry, which is often accused of being "pale, male and stale".

"It is disappointing to see so few women fund managers in our industry," says Emma Morgan, portfolio manager at Morningstar. She says that diversity optimises decision-making in groups and "therefore encouraging more women into portfolio management can only lead to better outcomes for investors".

The Morningstar data looks at the newest share class of each fund and accumulation units only. Some 442 funds were excluded from the list because the manager's name is not disclosed in Morningstar Direct. There are just 72 female fund managers in our list, running a total of 105 funds.

Jason Hollands, managing director at Tilney Bestinvest, says the proportion of female managers is "embarrassingly low", particularly compared with other professions such as law and accountancy. The dearth of females is also an issue among investment trusts, where some 43 of 303 trusts have no women on their board.

Perhaps the figures aren't too surprising; according to a study by campaign group the Diversity Project, just 9% of senior managers in the asset management industry are female. The figure is even lower when looking at just private equity and venture capital iinvestment.

What's in a Name?

To be successful in the fund management industry, it would appear that having the right name is important.

There are more than 100 funds run by men named David, with 64 different Daves and Davids in total (some run more than one mandate) including popular investors such as David Coombs, manager of Rathbone Strategic Income Portfolio; David Curtin, manager of the Silver-rated iShares UK Gilts All Stocks Index; and David Moss, who runs the BMO UK Mid-Cap and BMO Select UK Equity funds. 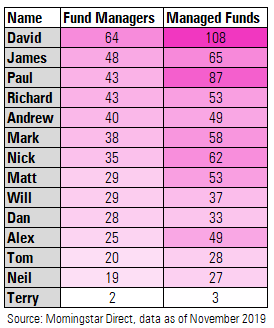 The most popular names among women are Kate and Johanna, but these total just six and five respectively. Among the best performing funds run by a female manager is the four-star rated Trojan Global Equity fund, run by Gabrielle Boyle. The fund invests in large-cap companies across the globe including Microsoft, Visa and Paypal and has delivered annualised returns of 13% over five years.

Meanwhile, the four-star rated Scottish Widows European Select Growth fund, is up 22.5% year to date and has delivered annualised returns of 10.5% over five years. Run by Catie Wearmouth, it focuses on big European names such as Nestle and Heineken. 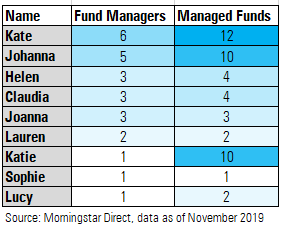 Morningstar's Morgan says: "It's a great shame that the industry is missing out on a whole swathe of talented individuals. The more the industry can do to attract and promote women in fund management, the better outcomes we can achieve for everyone."

Diversity in the Spotlight

Diversity is an issue increasingly in the spotlight in the world of finance and several non-profit organisations are working on the problem. For example, 100 Women has recently launched a female fund manager visibility campaign, and Gain, set up by fund manager Charlotte Yonge, aims at inspiring young women of sixth form age (typically 17 and 18) about a career in asset management.

However, Jason Hollands points out that improving diversity at the front-line management level will take time as it needs to start with graduate recruitment.

Morgan thinks that firms also need to look at how they can support the recruitment and retention of more women. "On the recruitment front, there is an industry perception which clearly isn't chiming with young women, as the number of applications for junior roles remains disproportionately low," she says. "Long-term investing is far from the macho image portrayed in the movies and firms should look at ways they can help to change this, perhaps starting with job descriptions."

InvestmentEurope hosted the Women In Investment Awards Italy in October 2019. Further details of all the winners and their insights can be found here: https://www.investmenteurope.net/tag/women-in-investment-awards-italy-2019.

The Awards will return next year in both Milan and Madrid.

Investec AM to rebrand as Ninety One