A clear majority, 64%, of Swedes surveyed by TNS Sifo Prospera on behalf of the Swedish Investment Fund Association (Fondbolagens förening) believe that it is good to be able to select funds for part of their pension savings.

Among younger savers the ratio is higher, 77%, in the 18-34 age group. However, even amongst those currently using the default fund - Såfan - in the premium pension system  there is a majority, 63%, in favour of being able to self-select.

The survey questioned 1,171 Swedes for their views of the premium pension (PPM) system, and whether on the whole it is beneficial to be able to select funds for part of their pensions, or if preferred that the state would decide how their pension assets should be managed.

The Association has also broken down the answers by gender. This suggests that men (Man) have a slightly higher bias towards self-selection than women (Kvinna - per the table below)

"All age groups are positive to the opportunity to self-select funds. Even if we know that the youngest savers are not yet so active it is important to note that it is the pensioners of the future, that is, those who should draw benefit from the system over the longest time, who value choice highest." 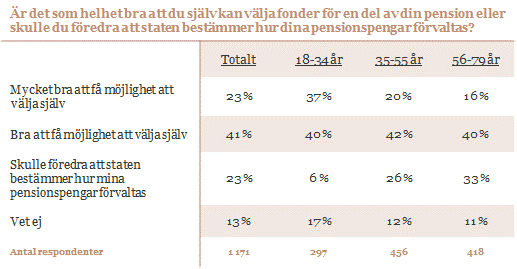