Should we judge China on PMI data?

Douglas Turnbull, head of Chinese Equities at Neptune Investment Management comments on the concern around China’s economic activity and how much we should judge China on its manufacturing data.

On Monday the Shanghai Composite Index temporarily shut amidst significant volatility, which saw the market down -6.9%. The short shutdown was triggered by new ‘circuit breakers’ intended to interrupt panic selling, the last round of which was brought about by Monday’s Manufacturing PMI release, which continued to show contraction.

Whilst the market has since stabilised, concerns about China’s economic activity and growth rate have dominated headlines since last summer: what is really happening in China and is the hard landing in evidence?

The immediate reaction saw the domestic Chinese market plunge -6.9% and temporarily shut, a reaction that further amplified fears globally. However, it is important to remember that – unlike in most other major economies – this market is neither reflective of nor reflexive on the economy, given its predominantly retail and very narrow investor base.

As such, it is susceptible to violent moves in either direction. It is vital not to mistake this market’s signals for significance and likewise not to misread the underlying economic data. Indeed, we believe a closer examination of the real world data shows a story far more benign than the market’s worst fears; a path of gradual slowing growth which we believe will lead to a rebalanced and healthier economy, rather than a hard landing unfolding.”

“This week’s data fits well into the continuation of these trends. Economic rebalancing, which will drive China’s growth and wealth creation through the next decades, has been borne out in the figures. Witness, whilst the (old economy) manufacturing PMIs have been contracting for some time now, the (new economy) service counterparts have held up well. Services have played a key role in supporting the overall growth level and are now almost 50% of the Chinese economy, as well as being responsible for almost 80% of GDP growth.”

“The same pattern is evidenced in the impact that primary, secondary and tertiary industries have on China’s overall economic growth profile, as demonstrated below.”

The contribution of tertiary industries is rising 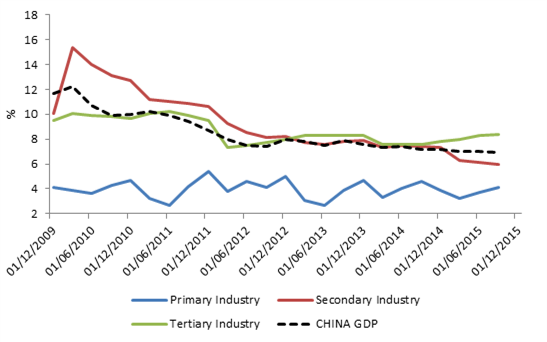 “Although overall growth has slowed, crucially, this decline has been controlled. It should be understood that the longer-term trend of slowing is inevitable, not least due to the law of large numbers but more importantly due to the process of economic rebalancing. Whilst the broad trend is indeed to a slower economy over time, the government stands willing and able to manage that decline with substantial fiscal and monetary firepower – as yet unused – at its disposal. Furthermore, China has a unique political economy which allows for pre-emptive action to see off potential crises, most crucially in the financial system.”

“Further evidence of this shift within China’s economic base can be found at a slightly more micro level. Whereas fixed asset investment growth has been slowing very substantially over the last few years, due both to the aforementioned law of large numbers and concerns around previous investment having been too fast or inefficient, retail sales have continued to demonstrate great resiliency.”

“This is the China – one of a continually evolving consumer benefiting from around 10% per annum real urban income growth; one of fiscal expansion and monetary accommodation; one ultimately of slower but better quality GDP growth – that Neptune sees. As such, our confidence in China’s systemic stability and growth environment allows us to continue to position our funds for good global growth, unencumbered by fears of an exogenous Chinese shock, albeit in a world of diminished incremental demand for commodities. This real world view also drives our high conviction positioning in companies benefiting from this dynamic vision of China’s future, both domestically and internationally, across our range of funds, such is the global reach and application of Neptune’s real world research process.”